Astigmatism is a very difficult concept to explain to students and patients. There are no good webpage references on the combination of different spherocylinder lenses. Understanding how they add is however important in understanding how the Jackson Cross Cylinder works and also in understanding how astigmatic changes come about with surgery.
At North West Eye Specialists we have the Holladay software for analysing surgical astigmatism which is allowing each of our doctors to form their own database parameters for the optimized management of astigmatism.
As a teaching tool, i have developed an online astigmatism calculator – it can add and subtract spherocylindrical lenses. It is still in beta form and not 100% accurate but will help in the understanding of astigmatism. Please feel free to leave suggestions or drop me a line for the source code
Posted by Eye Stats at 17:59 1 comment:

One of the key things that ethics committees look at when determining whether to accept a research proposal is the statistical justification. The ethical issue is twofold:

Doing the statistical analysis for the application can be daunting and confusing for a prospective researcher. The online resources are often not very good either. I have found the easiest program to use for these calculations to be sigmastat. It is, however, quite expensive even for an academic license.

Fortunately, there is a free alternative. The free software package
r

can do all the power calculations for you and is available for windows, mac and even linux. It is not the most user friendly package so this guide is designed to help you use the program for your ethics commitee application.

First decide what test you are going to use.

T-test
work out your parameters – in this example assume that the standard deviation of the elephant tails is 20% and we hypothesize that the male ones will on average be 40% greater.
Fire up R and type ?power.t.test this will display the help screen

In this case the command to get your analysis is

this gives you 5 subjects per group

if you want the one tailed option (ie we are only testing whether male tails are longer male tails being significantly shorter is not a possibility)- you need
power.t.test(delta=0.4,sd=0.2,sig.level=0.05,power=0.8,alternative=”one.sided”)

The first step is to work out Cohen’s D value – this is the difference in the means divided by the standard deviation – in this case 2.0

then ?pwr.anova.test for the help screen

and for our power calculation

and for our example

which gives us 7 per group

I hope this is useful and i might revise this with some more tricky power calculations later. Any experts are welcome to comment

Do it Yourself Climate Science with R and GHCN


As a scientist but yet-to-be-convinced about climate change, I was challenged to have a look at the climate data myself. After all, statistical modelling is what currently interests me and the open source software R does modelling particularly well.

First you must get and install R – the program is available for all platforms from http://cran.r-project.org/

the actual data can be downloaded from ftp://ftp.ncdc.noaa.gov/pub/data/ghcn/v3/

monthly average, min or max data can be downloaded. This needs to be unzipped to the .dat file

this file is then loaded into R

> require(RghcnV3)
> v<-readV3Data(filename='c:\\yourdirectory\\foo.dat') #assuming your data has been renamed foo.dat and you have a windows machine - syntax is slightly different for a linux or mac
> stationNames<-dimnames(v) # get the station names

Now you need the id of the station you want. This is available here http://data.giss.nasa.gov/gistemp/station_data_v2/v2.temperature.inv.txt

so now which column is Omeo ?

so let’s get the data for that :

this creates a data frame of the omeo data. you can have a look at it by typing odata

To get a rough and ready plot, you can stack it into a single vector

and this can be plotted

now, there are many missing values from 1701 so let’s just plot the ones we have 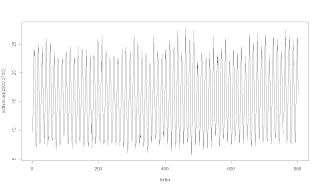 and you can try and spot the warming.